You are here: Home | All News Items | Secrets of a Formula 1 Front Wing
Warning: A non-numeric value encountered in /home/customer/www/totalsimulation.co.uk/public_html/wp-content/themes/rttheme17-05072016/content_generator.php on line 123

Secrets of a Formula 1 Front Wing 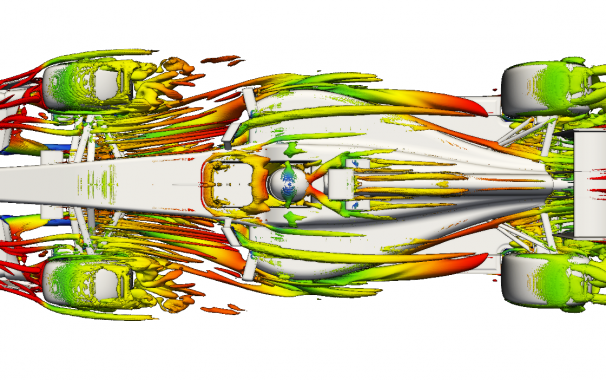 The front wing of a modern Formula 1 car is a marvel of aerodynamic engineering and ingenuity. It is the result of fifty years of mechanical evolution, and in this case, it is the survival of the fastest. The current state of the art front wings exhibit an unprecedented degree of complexity and intricacy (figure 3), and is a testament to the number of man hours spent fine-tuning this device. In fact, a quick Fermi approximation reveals that the number of man hours spent on front wing development within the history of F1 is probably of the order 5-10 million man hours (that’s the equivalent of you working 1000 years non-stop 24 hours a day!).

Why do Formula 1 teams go to such extraordinary lengths to develop this remarkable device? Well, in the realm of motorsports, downforce is king. Figure 1: Above and below images of a Formula 1 car highlighting the intricate nature of flow structures around the vehicle.

Visualised are three dimensional surfaces of constant vorticity (a measure of spin associated with the flow) coloured by static pressure. Notice how the front wing generates a number of elaborate vortical structures (think of them as miniaturised tornados) which propagate downstream influencing the performance of the entire car. (CFD simulations and flow visualisations conducted by TotalSim. Many thanks to Nic Perrin for releasing his F1 car as an open source model to analyse.). Figure 2 (left): The Porsche 550 Spyder with an ‘inverted wing’ as conceived by 22 year old Swiss engineer and amateur racing driver Michel May in 1956.

This is perhaps one of the first practical implementations of race car aerodynamics to help increase downforce (the majority of aerodynamics prior to this focused soley on streamlining the bodywork to minimise drag). This wing concept proved to be a great success as Michel ended up beating the works Porsche team. However, as with most revolutionaly concepts in motorsports, the wing was subsequently banned! (Original source: http://type550.com/racing/drivers/michel-may)

Over the next few weeks, we’ll explain why the generation of downforce is now the principal differentiator between winning and losing. We’ll explore the mechanisms of downforce generation and reveal the aerodynamic secrets behind the design of a modern F1 front wing. We’ll reveal performance related facts and figures and explain the underlying science which governs this device.

Our unique articles will utilise cutting edge CFD (Computational Fluid Dynamics) to visualise the hidden world of aerodynamics and shed light into this so called ‘black art’.

Figure 3 (above): The front wing of the Mercedes F1 W07 car. A sophisticated evolution of elaborate wing like elements precisely arranged and highly optmised through countless hours of CFD simulations and wind tunnel testing. The stunning complexity is a visual reminder of the fine margins required to extract every last ounce of performance. Photo credit – Octane Photographic Ltd – www.octanephotos.co.uk

2 Responses to Secrets of a Formula 1 Front Wing