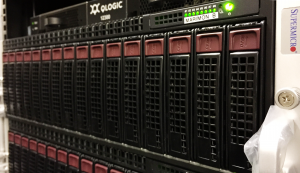 The latest generation of TotalSim cluster. Significantly faster due to the utilisation of the latest Haswell CPU architecture & DDR4 memory, increasing the memory throughput compared to the predecessors in the TSX9-MC recipe.

The difference between the TSX10-MC and the TSX9-MC is the move to Haswell CPUs (Intel Xeon v3) which has support for DDR4 memory and AVX2 extensions. This move to a later architecture has allowed us to keep our recipe for the TSX10-MC very similar to that of the TSX9-MC, the main differences being later versions of the available technology. This similarity in specification & design means that we are confident in the performance, scalability & maintenance of the latest recipe.

A few other changes of note for the latest recipe are the update from CentOS 5.8 to CentOS 6.5 as the cluster operating system, this update provides additional support for the v3 hardware as well as bringing the kernel, libraries & packages a little more up to date. Also, due to the lack of support & maintenance for Sun Grid Engine we have migrated to Son of Grid Engine which is an actively maintained community alternative to Sun Grid Engine which provides fixes to some bugs & issues that were present in Sun Grid Engine.

A full product data sheet can be downloaded here.