You are here: Home | All News Items | NPL Hull Validation - Frictional and Total Resistance - Tank Vs CFD
Warning: A non-numeric value encountered in /home/customer/www/totalsimulation.co.uk/public_html/wp-content/themes/rttheme17-05072016/content_generator.php on line 123 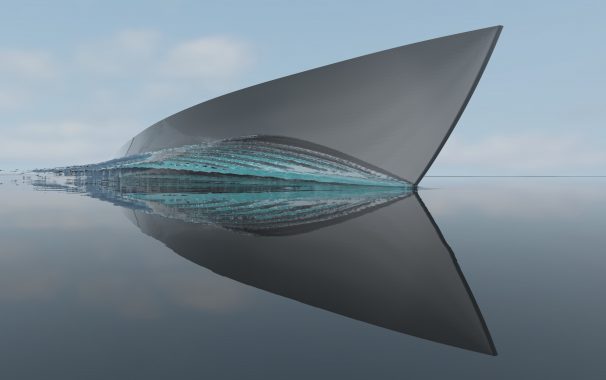 TotalSim have recently been working in partnership with one of their support customers, Naval Architects Olesinski, on validation of TotalSim’s best practice for hull resistance prediction.   One area in particular that Olesinski were interested in was how well the frictional resistance was predicted by the solver.

The NPL high speed hull series was chosen (Bailey, 1976), as it is a respected test case, with a challenging non chined hull form.  The data series also covers a large Froude range.

Initially our static (no degrees of freedom) methodology was tested with a VOF approach within OpenFOAM**.  The sink and trim of the hull was fixed, as specified by the tables within the experimental data.

The Frictional forces were very well predicted.  The Total resistance curves were less well predicted, although the general trends obviously recreated. The lift force for the hull was also under predicted in CFD, which resulted in the reduced resistance prediction, particularly at higher speeds. There was also a net moment around the specified rotation centre, all of which suggesting that the models were not quite in equilibrium.  Very small changes in sink or trim can create significant differences in resistance and lift.

To remove any potential inaccuracies from the experimental measurements of the sink and trim, the resistance curve was repeated with a solver that allowed 2 degrees of freedom of the hull (sink and trim).  The total resistance curve prediction was significantly improved with the solver doing a good job of recreating it.  The 2-DOF solver ended up trimming the hulls by less that 0.5 degrees and shows the sensitivity of trim and heave to resistance.

The method used within this validation case is highly automated.  The entire meshing process is automated, with minimal human interaction, only requiring an input stl of the hull.  The solving and postprocessing is also done automatically.  Unlike some commercial codes the same solver was also used through the entire speed range.

“…TotalSim provides us with the support and flexibility required to improve the correlation between the results the software gives us and our validation cases.”

To find out more about how TotalSim can help with your Resistance Prediction requirements please use the contact details below.  Whether you are after consultancy, a cloud based service or an alternative to commercial codes, TotalSim can help.

**OpenFOAM® and OpenCFD® are registered trade marks of ESI.

As we utilise open source codes you may be pleasantly surprised how affordable CFD is as an alternative to tank testing and commercial codes.